Family & friends of a mathematics professor from Twickenham have donated funds raised in his memory to The Access Project to pay for a series of student prizes. Professor Jeff Cash, who taught at Imperial College London, had to battle against the odds to gain a university education. His family are honouring his memory by supporting students at The Access Project (TAP), a charity that helps disadvantaged students access top universities. 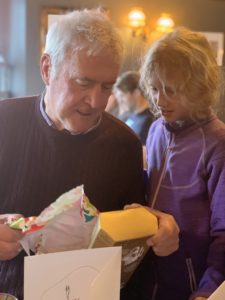 Professor Jeff Cash with his granddaughter

Professor Cash, who passed away in June after a long illness, attended Trafalgar Primary School in Twickenham and went on to study at Thames Valley Secondary School. He told his family that it was incredibly uncommon for students like him to go on to further education at the time. He’d often recall how the rest of his class laughed when he revealed his ambition to study mathematics at university. He went on to do just that at Imperial and completed a PhD at Cambridge University becoming the first person in his family to go to university.

The Access Project supports students from disadvantaged backgrounds to attend top universities through a unique combination of personalised tuition and in-school mentoring. Independent analysis from FFT Education Datalab shows that students who are tutored for two years at GCSE make five months more progress in their studies. At A-level students who attend more than 23 tutorials with TAP make six months more progress than similar peers. UCAS data shows that TAP students are four times as likely to attend a top university.

More than £1000 was raised in Professor Cash’s memory and the money will pay for vouchers for prize winners over two years. The prizes recognise students’ dedication to their studies in turning up for tutorials and committing to improving their grades. One of the Year 13 students recognised by TAP this year is Jessica Kappy, a former student at City of London Academy Highbury Grove, she recently secured a place to study Medicine at Oxford University. She is also the first person in her family to go to university. Jessica’s commitment to her studies impressed the judges, as well as the support she’s given to other students with TAP.

Professor Jeff Cash’s daughter Hannah Brown said: “He wrote books on mathematics, published over one hundred academic papers, developed outstanding software packages and supervised multiple PhD students. He remained incredibly modest despite his achievements, he shared his knowledge freely and was a wonderful mentor and advisor to his students. He believed in people and ideas rather than reputations and treated everybody equally without preconceptions.”

Ellie Baird, University Events & Student Enrichment Manager at TAP, says the awards will lift student’s spirits at the start of a new term: “We are so proud of what our students have achieved during such a challenging year. The donation in memory of Professor Jeff Cash has meant we have been able to celebrate and congratulate them for their hard work. We’re hugely grateful to the friends and family of Professor Cash for the donation and we are delighted to be able to award these prizes in his name.”