Jayden helped raise over £1,500 for Ukraine: “It felt right to do something” 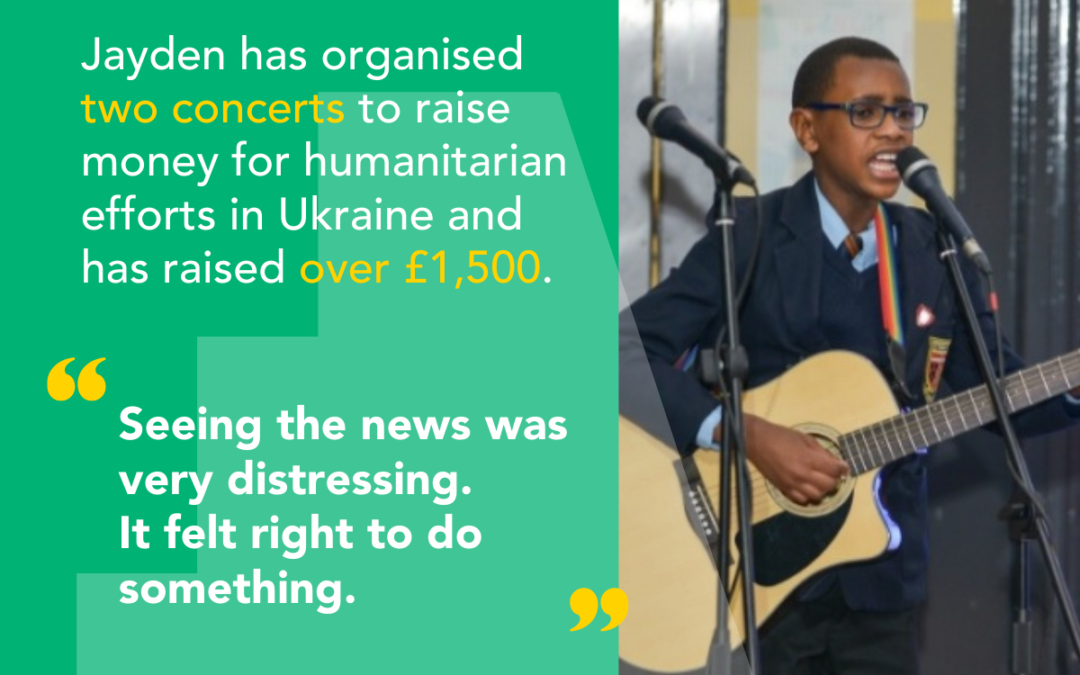 The Russian invasion of Ukraine happened the day before Jayden’s birthday. “When I first heard the stories I didn’t want to get involved,” Jayden explains. “Seeing the news was very distressing. However we started to hear more news about it in the local church community I am part of. There is also a boy in Year 7 who grew up in Ukraine and still has friends there. It felt right to do something.”

Jayden has organised two concerts to raise money for humanitarian efforts in Ukraine and has raised over £1,500. One of the concerts was at his school and the other was at his St Paul’s Church in Wood Green. Between 60 and 80 people attended the first concert.

Jayden performs contemporary Christian gospel music – and is planning to release an album in the summer called Creation.

Jayden has been tutored in A level Chemistry. “It’s going really well,” he tells us. “I get to go over the topics I’m struggling with in class, so it’s very helpful. We’re about to start going through practice papers.”

He has also been getting support from his in-school mentor, Mairead. “Mairead’s helped me understand university – and helped me make decisions,” he says. “She’s been very supportive and all the sessions have been very good. It’s been really helpful to talk about the future.”

Like Jayden, 97% of our students said that their one-to-one meetings with their University Access Officers were a good use of their time.

Dreams for the future

Jayden has many dreams for the future. First of all – he wants to go to university. “I want to study Chemical Engineering,” he explains. “I’m thinking about the University of Nottingham or University of Southampton.”

Secondly he wants to continue his dreams of music. “Music is something I enjoy,” he gushed. “I don’t struggle with it. It doesn’t take as much effort as a degree.”

We asked Jayden what he’d say to a young person in the years below him, that might be considering going onto The Access Project. “Definitely do it! It has a lot of benefits if you commit to it and attend all the sessions and the provisions. I’d encourage any child to do it!”

Learn more about our impact