Think Oxford University isn’t for you? Take a visit and you might be surprised… 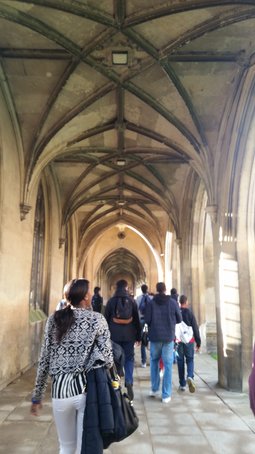 Three months ago, Tiffany, who is both a Programme Coordinator with The Access Project and an Oxford University graduate, took four students from St George’s Catholic School in London on an horizon-expanding trip to an open day at her alma mater. Here she reflects on the day.

“We arrived to a rainy Oxford and headed straight for Balliol College, a tactical first choice as they always give out bags, which saves you trying to carry the reams of paper inevitably given out at these events. It was also tactical for another reason; the students I was with had a very set impression of the types of students that attend Oxford and they felt it wasn’t for them. Balliol is known for being easy-going and having a larger intake of state school pupils than other colleges at Oxford. I was delighted to walk in and see a really diverse range of students. Result! This was exactly what I needed to reassure my own students that Oxford could be for them.”

“We did the normal tours of the facilities and looked around some of the other colleges and while they were interested and engaged, the students still seemed to have the impression that this wasn’t really the place for them. I was beginning to worry that the trip would end up putting them off applying — the exact opposite of the intended result.”

“But my fears were soon allayed when at lunch we met up with Sam, a cousin of one the students’ tutors. The students mentioned to him that everyone here seemed unlike them. Sam, a previous state school student himself, seemed fairly nonplussed by the comment and responded with a ‘yeah, but, so what?’ He then proceeded to achieve more in a few sentences than I’d managed all morning. He pointed out that there are people from many different backgrounds at Oxford, but fundamentally no-one really cares. People don’t choose their friends based on what type of school they went to or how much their parents earn and, at the end of the day, everyone has one big thing in common in that they got into Oxford.”

“This tiny idea was a game-changer and the day finished with the students being much more positive and discussing where was better out of Oxford or Cambridge and which colleges they liked the best.”

Fast forward a couple of months and all of the students who attended the open day submitted an application to Oxbridge. Amazingly, three of the students have been invited to interview, proving that Oxbridge might just be for them after all!