Tutor tales: Why school struggles were the motivation to volunteer

Volunteers tell us about tutoring against the backdrop of COVID, the rollercoaster ride of results day, and why they work with The Access Project. This is Lucas’s story… 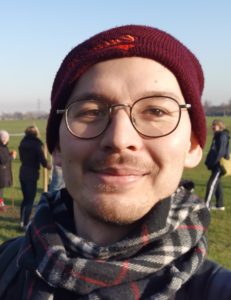 Lucas Prytherch has been a tutor with TAP since 2017

I’ve been a tutor with The Access Project since 2017, and it has unsurprisingly had its ups and downs, whether it be celebrating as a student gets through the next phase of an applications process or offering consolation to a student who found the pressure of exams too much. In any normal year it’s a rollercoaster of emotions, but in 2020, you can probably imagine…

I see similarities between my school struggles to those experienced by students today; during my A-levels, my chemistry teacher quit after one term and they didn’t replace him, so I had to self-teach.  My psychology AS-level was taught to the class once-a-week via video-call, which in the 2000’s was a pretty dreadful experience fraught with frequent technical issues and cancellations. I was never set up to pass those A-levels, and subsequently had to spend my second year working twice as hard to make amends.

Many of the issues that students face today are beyond the classroom. There was an episode of Channel Four Dispatches that really stuck with me, “Growing Up Poor: Britain’s Breadline Kids”. I distinctly remember Danielle, a GCSE student, doing her homework on her bed where she slept in the same room as her mum in a cramped studio flat. It was no place to study, obviously. You could see from a mile off she was set up to fail, and she got her results, failing all but one subject: food preparation and nutrition. It was devastating.

During lockdown, I offered to tutor a new student digitally, because I felt they needed all the support they could get. Starting off as a new pairing is exciting but tricky. You must build a rapport, know when they’re losing concentration, figure out how much you can challenge them and turn course content into something interesting to them. Then there’s the new challenge of using a digital whiteboard. Could you imagine how much more difficult that would be for a student like Danielle? Working from a bed, with noisy brothers and sisters coming and going, while trying to find a quiet hour to study? These are the students who need our support.

When the 2020 A-level results came onto the news, I was straight onto the phone with my ex-student to check in. She was downgraded by the algorithm and understandably upset, but at the same time completely lost as to what to do. If you don’t come from a network of serial-university-graduates how would you know where to turn? For my part, having grown into middle-class indignance, I did everything I could think of; writing to MPs, using my professional network to brew up a storm, and helping to figure out the appeals process. It was eventually resolved through a government U-turn, but it was still important for my student to know people were supporting her. Her teacher assigned grades, AAA (which she thoroughly deserved and are accurate of her ability), were enough to secure her first-choice university and course. It was a bittersweet battle, but I was proud of her all the same.

I enrolled to become a tutor in mathematics, but inevitably, I’ve become a somewhat a champion for my students; helping them find work experience, supporting them in their university applications, and being a source of professional advice. With the longer-term impact of COVID19 on education, and the naturally discriminatory way it affects students from already disadvantaged backgrounds, it’s important that we all play a part in rising to the challenge and supporting our students. I think back to my champions when I was a teenager, and the one that always sticks out is my youth worker, who inspired me to get involved in youth work and tutoring in the first place. Now, my student from 2017 has already begun tutoring as well, at the age of 19, which fills me both with joy and hope that I’ve had the same impact on him; enough to keep the chain going.

Lucas is a Project Manager for major infrastructure projects at Transport for London. He went to state primary and secondary school and later to the University of Liverpool, where he studied a Masters in Mechanical Engineering with Management, and received a 1st class degree with honours. He tutors A-level students on The Access Project programme.