Two years since lockdown: Ahsan’s experience during the pandemic 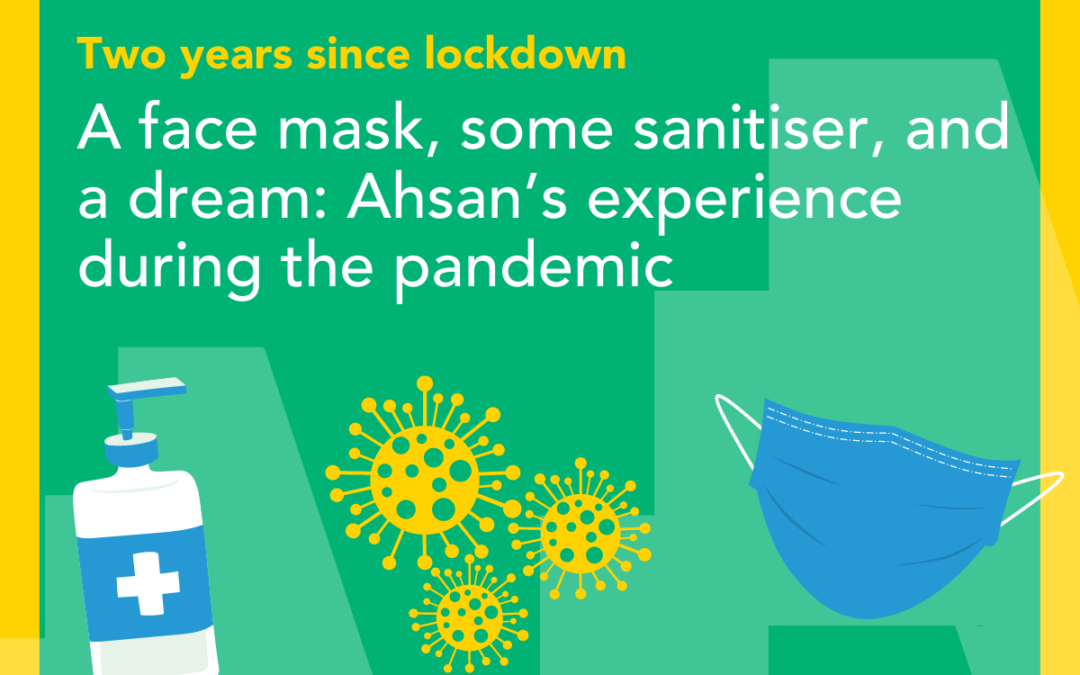 To say that this pandemic has been disruptive to young people’s education is an understatement – particularly for the disadvantaged students that we work with. Over this time, we have shared how online tuition has helped young people during the pandemic and what we are still doing today to ensure that we mitigate the disruption caused by the Omicron variant.

But what would our students say about their experience of the pandemic since the first lockdown two years ago? Here our student Ahsan explains how things have changed for him.

You see most teenagers nowadays think they’re invincible. Not the superhuman kind of invincible, but the type of invincible which makes them think they always have that one extra day to set their lives into motion, that one extra day to start chasing their dreams. Hardly any of us realise this, so our youth will often take the blame instead. We’ll eventually be told that we were too caught up in the small things to take care of the future. You’ve probably heard the saying: “you don’t truly appreciate what you have until it’s taken from you.”

Every day for me felt like déjà vu, hardly anything at all changed. I’d wake up, get ready and walk to school where I’d sit through hours of lessons before coming home and studying night after night. The day would seem to carry itself till the moment I woke up again.

Deep down, I knew I wanted something to change, something different that I could wake up to knowing I’ll finally be able to breathe a breath of fresh air.

And then it hit, a seemingly otherworldly pneumonia outbreak – anything but a breath of fresh air. It wasn’t long before the World Health Organisation announced it as a pandemic and the entire globe could only stand and watch in disbelief. People dropping like flies within the first six months and before I knew it, the whole country was in lockdown.

Life seemed worse than it was before, the whole situation felt like a snap of fingers in front of my face, a wake-up call to how comfortable we all made ourselves. I hadn’t seen a single face other than my own family’s in person and those which I did see were hidden by face masks.

It really did start to feel like a dystopia.

Every day was spent talking to a screen, pushing buttons, reading live chats and occasionally catching news of random anti-maskers who chained themselves to shopping carts in the middle of a supermarket. Half the time it didn’t even feel like a dystopia, it just felt like people were lost; as if they didn’t know what to do with their lives, even if it meant coughing on people just for the sake of it. But those long and restless days filled with confusion and curiosity also taught me something: that there are people who don’t realise how fragile their lives can be. There are others who saw COVID-19 as an opportunity and are now basking in its rewards, over five million people worldwide became millionaires during lockdown alone.

For me, it gave me the chance to pace my ideas, one small task at a time. Eventually people won’t have to blame my youth for the way I turned out. Instead I’ll be able to rejoice at the fact that I could even live to tell the tale in the first place.

The pandemic taught us all something at least. I’m sure this current generation will all have stories to tell in ten years’ time. Soon the time will come when we can all look back and realise how much we went through, appreciating it even more than we do now.

So in a way, teenagers really do have more at their hands than they realise. Because that knowledge that they have, decades of discovery and success to experience – paired with the idea that only a pandemic could set them apart, will turn flames into wildfires. All we have to do is help each other put light to that flame.

We can only do the work we do to help students like Ahsan catch up with lost learning with the help of amazing donors – small and large.