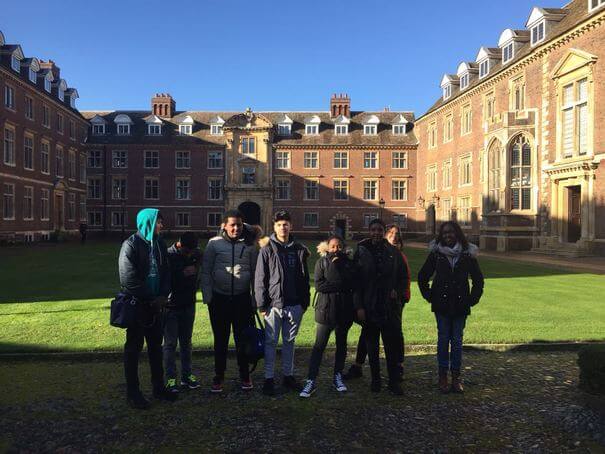 This Tuesday, during a taster lecture on modern cultural history, I listened as the The Beatles’ 1965 song ‘Norwegian Wood’ ended, and Professor Peter Mandler asked his audience if anyone recognised the song he’d just played. The question was aimed at an audience of year 10 students from across London who were, as part of The Access Project (TAP), visiting St Catharine’s and Gonville and Caius Colleges at The University of Cambridge. Not one of them raised their hands.

As part of The Access Project, we take our students on trips to Oxbridge during their half term breaks, with students from London visiting Cambridge and students from the East and West Midlands visiting Keble College, Oxford. The trips are designed to give students, who are halfway through their first year on our programme, a more developed idea of what studying at two of the world’s best universities would be like. We know that many of our students have never considered Oxbridge as a viable option for higher education – indeed many of them may not have previously considered accessing higher education at all.

For them Oxbridge, like ‘Norwegian Wood’, is not part of their frame of reference. We quite often find that those who have considered study at either Oxford or Cambridge have preconceptions and assumptions of what life at Oxbridge is really like. We work primarily with students who are traditionally underrepresented in Higher Education; whose notion of Oxbridge shares more in common with Hogwarts than it does their own, or their families’, experiences. We try and give students the opportunity to picture what their lives in college would be like, to understand what a lecture is, and what on earth ‘punting’ really is. We hope they leave the day able to imagine studying at a university like Oxford or Cambridge.

To do this, talks and activities both from The Access Project, and from the University aimed at demystifying life at Cambridge, and tours of both St Catharine’s and Caius College libraries, bars and formal halls gave TAP students the chance to witness and discuss the reality of Cambridge with their tour guides, who were current undergraduates. Concerns ranged from how to choose which college to apply to, to whether you were allowed an Xbox in your rooms once you were there (the answer, to sighs of relief, was yes).

Throughout the day I was continually reminded of why we work so hard to encourage our students to aspire to study at Oxbridge. Lunch in St Catharine’s College precipitated a debate amongst my students about whether vegetarianism was an ethical choice given the implications it may have for farming communities. TAP students contributed intelligently to the afternoon’s two taster lectures, on bioengineering and the desired properties of materials in different situations, and Professor Mandler’s talk on the social and economic factors which facilitated the rise of ‘Beatlemania’. As we walked through one of Gonville and Caius’ three courts, I was asked to settle a debate. The question; does white privilege exist?

I left the day exceptionally proud. TAP students demonstrated exactly why they deserve the opportunity to access Oxbridge; they are thoughtful, intelligent and socially aware young people with much to contribute to these famous institutions, and to life beyond