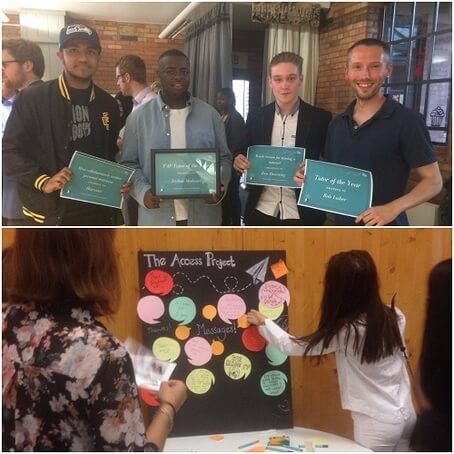 This year’s London annual summer party was bigger and better than ever. The London team arrived early to blow up balloons and set up tables which were to hold the whopping 50 pizzas, the sweet stall and the giant version of Jenga. The photo booth arrived shortly before the taxi loads of students got there and the evening was sure to be a success.

Over 150 guests attended, including tutors and friends of The Access project. All 50 pizzas were eaten in the first hour of the party and there were screams from the games table as students competed with each other for the ‘coveted’ prize of Jenga Master. The queue for the photo booth didn’t seem to shorten as students lined up to practice their graduation poses in the full gown and mortar board. The Access Project message board had some great posts on, including “I’ve had a great time being tutored, thanks” and our favourite “thank you, best project ever”.

Excitingly, the West Midlands Access Project community had their first ever summer party this year, which was hosted in our brand new West Midlands office, the exposed brickwork made the  London team very jealous.

Like the London party there was pizza, drinks and vibrant conversation. The West Midlands message board also had some great posts including,“I actually don’t know how I would have gotten through Year 11 without the help of Ms Beech (Programme Coordinator) and Ryan Gill (tutor), thank you so much”.

Poetry was the main attraction in the West Midlands with the spoken word artist, Aliyah Denton making a special appearance. She performed two pieces, the first was about how she communicates with her grandmother who speaks a different language to her and the second was about social mobility, widening participation and discrimination which  was of particular relevance to our students.

At both events the awards ceremony began with nominees and their friends sitting down excitedly to hear the results. Please see below for a full list of winners, including winners of the not so conventional awards in the West Midlands.

Most requests for a bus pass- Atif Khan- Moseley School